The Tabernacle proper was divided into two rooms between which hung a decorative veil. The front room, called the Holy Place, contained three items of furniture visible as you walked in. On the right was the Table of Shewbread. We discussed this last week. In front of you was the Altar of Incense. We will discuss this next week. The purpose of today’s post is the item on the left, the Golden Candlestick.

Moses draws the picture for us in his Old Testament way.

You will notice that although no specific dimensions are given it was designed to look like an almond bush with branches, buds, flowers, and fruit, and from the tip of each of the seven branches the stem burst forth into light.

Allow me to drag you in haste through the corridors of time forward nearly 1,500 years. About six months before Jesus’ death had come to Jerusalem to attend the Feast of Tabernacles. This harvest feast commemorated the period the Jews spent wandering in the Wilderness. Temporary shacks or booths were erected out of branches for this purpose, and the Jews spent some time living in these booths during the eight days of the feast. As the years progressed, the Jews of Palestine added some other elaborate events, such as the ritual drawing of the water from the Pool of Siloam as a memorial of the water that flowed from the Rock in Horeb. It was during that ceremony that Jesus stood and shouted through the solemn hush, If any man thirst, let him come unto me and drink. (John 7.37)

All through the Feast there had been a vigorous national discussion over the place of Jesus. He had been fussed at from all sides, and that was even before He ruined the closing ceremonies with His dramatic announcement. After that bold declaration the Sanhedrin met, reprimanded the Temple police for failing to stop Him, and then argued themselves horse over Who He was and what He represented.

The next day, an unbowed Jesus Christ marches right back into the Temple, and proceeds to spend the entire day teaching. This Temple was not the one built by Solomon, of course, for that one had burned six centuries before. At its heart it was Ezra’s Temple built during the Return but now ‘twas hardly recognizable as such. Herod the Great, now long dead, had launched a massive renovation of it that at this point had been going on for nigh on four decades.

Included in this project were vast courtyards where tens of thousands of Jews could gather. How to light these courtyards at night? Why not use that world-wide symbol of Judaism, the menorah? There was one inside the Holy Place but there was another, even larger one, gracing the exact courtyard where Jesus tangled with the Pharisees that night. Twice as tall as an interstate street light, its ornate branches fairly burst forth with brilliance, lighting up the Treasury in the Court of the Women hundreds of feet in every direction.

Picture the scene in all of its grandeur. Tens of thousands of Jews are gathered, debating, discussing, enjoying the Temple grounds following the Feast of Tabernacles. Evening has fallen. Herod’s great menorah, so huge its likeness can still be seen on the Arch of Titus in Rome, lofted fire seventy five feet into the air in all directions. The Sanhedrin and the Pharisees have been after Him all week. Yesterday, He ruined the parade coming from the Pool of Siloam and stole the High Priest’s thunder. Today, He teaches all day and brings such conviction to the Pharisees simply by writing on the ground that they are still running. Tonight, then, what will He do tonight?

Standing in the blaze of glory He shouts, I am the light of the world: he that followeth me shall not walk in darkness, but shall have the light of life. (John 8.12)

It is not difficult at all to see what the Menorah in Moses’ Tabernacle represented about the Messiah. He told us Himself a millennia and a half later. To this both the Apostle John and John the Baptist agreed, saying,

John 1. 4 In him was life; and the life was the light of men.
5 ¶ And the light shineth in darkness; and the darkness comprehended it not.
6 There was a man sent from God, whose name was John.
7 The same came for a witness, to bear witness of the Light, that all men through him might believe.
8 He was not that Light, but was sent to bear witness of that Light.
9 That was the true Light, which lighteth every man that cometh into the world.

What is so interesting here is not just the time and place of Jesus’ stark announcement, but the last phrase of that announcement. I am the light of the world. Jesus did not come just to be the Jewish Messiah, nor even just the Jewish Redeemer. He came for the whole world.

This was referenced all the way back at His birth when Simeon prophesied
he was A light to lighten the Gentiles. (Luke 2.32) That penultimate Jewish prophet, Isaiah, said the same thing, boldly declaring that the Messiah would save not just Jews, but everyone else as well. It is a light thing that thou shouldest be my servant to raise up the tribes of Jacob, and to restore the preserved of Israel: I will also give thee for a light to the Gentiles, that thou mayest be my salvation unto the end of the earth. (Isaiah 49.6)
Not only was this prophesied in the Old Testament and referenced at His birth, it was also understood this way by the Early Church. When Paul sought to explain why he routinely left synagogues and turned to reaching Gentiles in the cities in which he ministered he said, For so hath the Lord commanded us, saying, I have set thee to be a light of the Gentiles, that thou shouldest be for salvation unto the ends of the earth. (Acts 13.47)

Over three thousand years ago Moses instructed Bezaleel and company to make an ornate candlestick in the form of an almond tree. It was then lovingly placed in the Holy Place and carefully tended, filled with oil, the wicks trimmed and burning warmly. Two thousand years ago my Saviour announced that Menorah referred to Himself, and that He came to bring salvation to the entire world. Today, I sit overlooking a quiet hillside down by the Mississippi River, an ocean, a continent, and a world away from the Palestine of Jesus’ day and the Wilderness of Moses’ day. And I am glad. For that light has reached all the way to me. 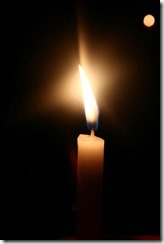 Email ThisBlogThis!Share to TwitterShare to FacebookShare to Pinterest
Labels: the Tabernacle