Evil in the Midst 8 ...Men Should Not Get the Credit

How could it be that God appeared to be using him so marvelously and yet he was so thoroughly evil so long?
…Because it is God's Word applied by the Holy Spirit that actually changes men; the leader should not get the credit.

So shall my word be that goeth forth out of my mouth: it shall not return unto me void, but it shall accomplish that which I please, and it shall prosper in the thing whereto I sent it. (Isaiah 55:11)
It is the spirit that quickeneth; the flesh profiteth nothing: the words that I speak unto you, they are spirit, and they are life. (John 6:63)
So then faith cometh by hearing, and hearing by the word of God. (Romans 10:17)

If there is a truth that is all too often forgotten by the people of God and the men of God of our own generation it is this: the Holy Spirit using Scripture changes men. We are so prone, after attending some great conference or having our hearts stirred by music from the heavenlies, to credit the men whom God used instead of the God who used them. So often the grace and power of God is poured out through some earthly vessel and we, in our shallowness and spiritual immaturity, remember and admire the vessel more than we do the God using the vessel and flowing through the vessel.

We flock to be noticed by these great men of God. They sign our Bibles. They receive standing ovations in our pulpits. They are given poems, honorariums, and doctorates. They are reverenced (reverend) almost to the point of worship. Their wishes are honored, and their advice duly followed. Buildings and institutions are named after them. They are called heroes. 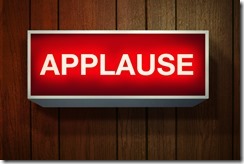 Please do not misunderstand me here. Paul, instructing Timothy in how to treat God’s men, said Let the elders that rule well be counted worthy of double honour, especially they who labour in the word and doctrine. (I Timothy 5:17) As a pastor myself I have had many fine honors come my way. I appreciate them all, and in a very real sense I think it is good for God’s people to respect and honor the position of evangelist, pastor, teacher, and deacon. But it is also true that this same Paul, when faced with men who wished to pay him too much honor, said Sirs, why do ye these things? We also are men of like passions with you. (Acts 14:15) Peter, when faced with a similar situation echoed those sentiments, saying I myself also am a man. (Acts 10:26)

Thus we see there is to be a balance between appropriate and excessive personal credit. While it is true that you and I may disagree on exactly where the line should be drawn between those two we cannot disagree that many Christians obliterate the line completely. They consciously or unconsciously place the credit for the lives changed around them on the man when nothing could be further from the Scriptural truth.

The Scripture is incredibly powerful. For the word of God is quick, and powerful, and sharper than any twoedged sword, piercing even to the dividing asunder of soul and spirit, and of the joints and marrow, and is a discerner of the thoughts and intents of the heart. (Hebrews 4:12) The Holy Spirit is incredibly powerful. And my speech and my preaching was not with enticing words of man’s wisdom, but in demonstration of the Spirit and of power. (I Corinthians 2:4) When men, even men who are almost in all evil in the midst of the congregation, preach the Scriptures the Holy Spirit can accomplish miraculous things. Those miraculous things are no more the result of the man preaching them than they are the result of the man in the moon, and we would do well to remind ourselves of that from time to time.

Postscript To The Reader

Some time ago it came to my attention that one of the missionaries our church had supported for years was found to be involved in egregious moral failures, and that these had been of longstanding duration going back decades. I do not pretend to be able to tell you why exactly he did what he did, but I can tell you that he left a trail of devastated lives in his wake. To those victims and the victims of countless other sinful men I respectfully proffer the preceding thoughts. May they grant you some measure of comfort and some level of understanding for the questions flooding your soul.

Many years ago and many miles away from this place a trial was held. In that trial an exceptionally good man was accused of trumped up charges. Witnesses were called but their testimony was weak and inconsistent. There was no circumstantial or physical evidence of wrongdoing of any kind. Undeterred, the prosecutors and witnesses pressed all the more vigorously for a judicial condemnation that would bring with it the sentence they so desired to see. At one point in the trial the judge, in sheer exasperation, according to verified and reliable historical record said, I find no fault with this man. (Luke 23:4) The judge was Pilate and the man was Jesus Christ.

In the succeeding centuries many have been the bitter accusations of misconduct hurled against those who bear His name. Sadly, much of the time those accusations are founded in reality for even the best of men are men at best. For all have sinned and come short of the glory of God. (Romans 3:23) Countless times the followers in bewildered puzzlement have wondered how it could be that such a good man could accomplish so much while being such a bad man. Countless times the hurt has turned into bitterness, marring their effective testimony, and damaging the cause of Christ. Dear reader, may I gently propose to you that although it may be true that someone you greatly respected hurt you you will never find any fault in Jesus Christ. He will never hurt you. He will never injure you. He will never fail you. He will never disappoint you. He will never be caught covering up any sin but yours, and that He covers with His blood. When (not if) men fail you, as the old song so eloquently says,

“Turn your eyes upon Jesus,
Look full in His wonderful face,
And the things of earth will grow strangely dim,
In the light of His glory and grace.”