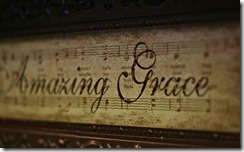 Perhaps the most famous hymn in Christendom is John Newton's "Amazing Grace". It can arguably be said that no one described grace better than he when he said,

Amazing grace! How sweet the sound,
That saved a wretch; like me!
I once was lost, but now am found,
Was blind, but now I see.

It is a wonderful description of grace because he is what grace produces - found from lost, sight from blindness, sweetness from wretchedness. And all of that at absolutely no charge.

The classic definitions of grace include phrases such as unmerited favor, undeserved blessing, unearned goodness, and complete acceptance. I prefer a story.

Grace, though much more than just that which saves us, is amazing to us precisely because that is where it found us all first. And that saving grace is still what we treasure the most. For the next several months on this blog we are going to explore the subject of grace, but we are going to start right here with saving grace. Our first grace.

Saving grace is where we first start with God. I spend 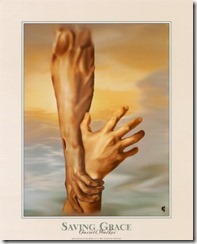 several dozen hours a year mentoring men who have been recently saved. Sitting down with Caleb recently, I explained that salvation is important because everything else in life revolves around it. Salvation is the hub of the wheel, the foundation of the building. You cannot start living life until you have been born, "quickened" in the immortal language of the Apostle Paul. This is where it all begins.

Ephesians 2. 1 And you hath he quickened, who were dead in trespasses and sins;
2 Wherein in time past ye walked according to the course of this world, according to the prince of the power of the air, the spirit that now worketh in the children of disobedience:
3 Among whom also we all had our conversation in times past in the lusts of our flesh, fulfilling the desires of the flesh and of the mind; and were by nature the children of wrath, even as others.
4 ¶ But God, who is rich in mercy, for his great love wherewith he loved us,
5 Even when we were dead in sins, hath quickened us together with Christ, (by grace ye are saved;)
6 And hath raised us up together, and made us sit together in heavenly places in Christ Jesus:
7 That in the ages to come he might shew the exceeding riches of his grace in his kindness toward us through Christ Jesus.
8 For by grace are ye saved through faith; and that not of yourselves: it is the gift of God:
9 Not of works, lest any man should boast.

We do not deserve mercy. We do not deserve Heaven. It is unmerited favor, undeserved blessing, unearned goodness, and thus complete acceptance. To the praise of the glory of his grace, wherein he hath made us accepted in the beloved. In whom we have redemption through his blood, the forgiveness of sins, according to the riches of his grace. (Ephesians 1.6-7)

Genesis 6. 5 And GOD saw that the wickedness of man was great in the earth, and that every imagination of the thoughts of his heart was only evil continually.
6 And it repented the LORD that he had made man on the earth, and it grieved him at his heart.
7 And the LORD said, I will destroy man whom I have created from the face of the earth; both man, and beast, and the creeping thing, and the fowls of the air; for it repenteth me that I have made them.
8 But Noah found grace in the eyes of the LORD.

Noah found unmerited favor, undeserved blessing, unearned goodness, and thus complete acceptance. Noah found adoption instead of vengeance. In other words, Noah found grace. This is the first mention of grace in the Bible and it is significant. It sets the context of grace, a gift prodigally poured out on sinful man. It sets the beginning of grace, a salvation from sin and from the justifiable wrath of a scorned Creator.

Saving grace is not only where we first start with God, and where God first started in the Bible, it is also what God places first in priority of emphasis when He discusses grace. The word "grace" is used 170 times in the King James Version. These passages have various contexts and purposes, and we will look at many of them over the next few months. But we first start with this for there are more verses that discuss saving grace than any other aspect of grace. First in use, first in time, first in the plan of God, first in emphasis, first grace.

I read many a secular biography and history. Just today I was reading Jack Weatherford's "Genghis Khan and the Making of the Modern World". It is a fine book, well-researched if not quite well-written. Running in place on the elliptical, my eyes staring vacantly at a screen over my head playing ESPN's Sportscenter, I listened as Weatherford went into long detail of a 13th century debate between William of Rubruck, a Franciscan missionary, and a Mongol shaman, a Buddhist monk, and an Islamic imam. The theological ignorance flying off the pages into my ears was staggering. Neither the author describing the scene, nor the four participants knew the first thing about God because none of them knew the first thing about grace. Yet God mentions it again and again and again in Scripture, emphasizing it, modeling it, explaining it, defining it, illustrating it, and applying it.

You can find saving grace in Genesis, Acts, Galatians, Ephesians, Titus, and I Peter, but we see it most clearly, perhaps, in Romans. In this matchless epistle, Paul deals at length with the problem of sin. He describes our great need of justification, how to obtain that justification, and how to then live above sin, conquering sin. Paul sets forth the widely held position of his day – that justification comes only through our good works – and demolishes it.

Romans 4. 1 What shall we say then that Abraham our father, as pertaining to the flesh, hath found?
2 For if Abraham were justified by works, he hath whereof to glory; but not before God.
3 For what saith the scripture? Abraham believed God, and it was counted unto him for righteousness.
4 Now to him that worketh is the reward not reckoned of grace, but of debt.
5 But to him that worketh not, but believeth on him that justifieth the ungodly, his faith is counted for righteousness. 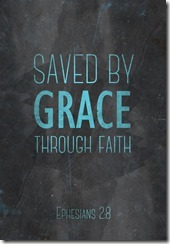 Faith in the person and claims and work of Christ is the hand that reaches up to Heaven to access the saving grace of God. By whom also we have access by faith into this grace wherein we stand, and rejoice in hope of the glory of God. (Romans 5.2) Thus, when I place my simple faith in the claims of Jesus to be God, to be sinless, to die an atoning death for me on the cross, to rise from the dead, to be the Messiah that saves me from my sins, I have accessed redemption and justification. I have thus, via faith, found the same rich, rich grace that Noah did, that Abraham did, that every man and woman and boy and girl in Heaven did. Therefore it is of faith, that it might be by grace; to the end the promise might be sure to all the seed; not to that only which is of the law, but to that also which is of the faith of Abraham; who is the father of us all. (Romans 4.16)

If you are paying with works then it is not unmerited favor, undeserved blessing, and unearned goodness. No, you are paying off a bill. The only way it can be by grace is if we do not pay the bill at all. In other words, grace and works are completely contradictory soteriological systems. And since it clearly is by grace it just as clearly cannot be by works. And if by grace, then is it no more of works: otherwise grace is no more grace. But if it be of works, then it is no more grace: otherwise work is no more work. (Romans 11.6)
Salvation is a free – through incredibly costly and valuable – gift.

Romans 5.15 But not as the offence, so also is the free gift. For if through the offence of one many be dead, much more the grace of God, and the gift by grace, which is by one man, Jesus Christ, hath abounded unto many.
…
17 For if by one man’s offence death reigned by one; much more they which receive abundance of grace and of the gift of righteousness shall reign in life by one, Jesus Christ.)
…
20 Moreover the law entered, that the offence might abound. But where sin abounded, grace did much more abound:
21 That as sin hath reigned unto death, even so might grace reign through righteousness unto eternal life by Jesus Christ our Lord.

Grace, free grace, rich grace, only grace, brings me to life. It quickens me, forgives my sin, declares me legally justified, and gives me an eternal home in Heaven.
James Gray, who for decades served God in the same city I do, wrote it this way:


Naught have I gotten but what I received;
Grace hath bestowed it since I have believed;
Boasting excluded, pride I abase;
I'm only a sinner, saved by grace!

No matter what else you may know about grace know this first – the grace of God saves you. It is where we begin. It is where He begins. First, grace.

Email ThisBlogThis!Share to TwitterShare to FacebookShare to Pinterest
Labels: grace