Elisha is about to die, so King Joash visits the old prophet. Joash has respected him as a man of God and wants some final counsel as Syria is oppressing Israel, he also wants a blessing.

Elisha tells King Joash that he has a message from God and asks Joash to take his bow and shoot an arrow out of the window. Elisha placed his hands on Joash's hands, stating that this is the arrow of deliverance for Joash and Israel.

Elisha then asks King Joash to take the arrows in his hand and to strike the ground. Joash, half-heartedly, hits the ground three times and stops. If Joash had not been so apathetic towards the Word of God, he would have struck the ground five or six times. His apathy angered Elisha. Israel would defeat Syria only three times; they would not be completely destroyed. Israel would lose because of Joash's indifference.

Elisha is angry because of the apathy exhibited by Joash, whose indifference may be rooted in the fact that he believed wrongly. Possibly, he felt that these were the ravings of a crazy old man. Likely, he had not paid attention to the Word of God, only half listening as Elisha spoke. Maybe, he was there only out of courtesy, not thinking that this meeting might be a very important one. Therefore, he was laid back and waiting to finish the obligatory visit. 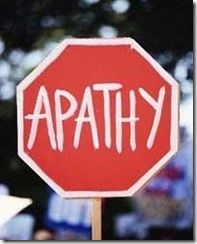 In most of our churches today, we see the same apathy: very few show up for outreach, visitation, or soul winning; most do not share the gospel with their family, friends, colleagues or anyone else for that matter. The pastor and staff urge people to take action, but they are unwilling. Our people do not seem to feel responsible for the eternal destiny of the lost. There is little to no concern. This apathy breaks our hearts as pastors and spiritual leaders.

What causes good, godly, people to be so unconcerned? What can be done to alleviate the problem? There is a lost world dying and going to hell but, we remain unmoved.

I place before you some reasons for the apathy we feel and see exhibited in our churches. With each reason, there are suggestions on how to fix the situation. We do not seem to feel the urgency to win souls or send missionaries, nor are our churches consumed with getting the gospel out to the world. Could it be that misunderstood doctrines, miserable doubt, and mistaken direction are root causes of the apathy we so desperately hate?

Our people have misunderstood many doctrines. They have fallen prey to skepticism, universalism, and fatalism. They do not realize this is happening, but it plays out in the way they live their lives and in our ministries. Let me explain what I believe is happening:

a. Skepticism: consider the following quote by A. T. Pierson: “Behind the shameful apathy and lethargy of the church, that allows one thousand million...human beings to go to their graves in ignorance of the Gospel, there lies a practical doubt, if not denial, of their lost condition.”

The apostle Paul under the inspiration of the Holy Spirit states in Romans 12:2 that we are not to be conformed to this world. The idea of being conformed to this world is that of being pressed into its mold. We accept what we hear on the news as truth; as a result, our doctrines, beliefs, and teachings are formed from our culture instead of from the Word of God.

Amongst our people, many doubt that there is a real, literal hell. They ask questions such as: will God send people to hell for eternity? Will they really spend forever suffering? God loves people, he would never allow that to happen.

In our tolerant society, people may be moved more by the secular media than by the Holy Scripture; consequently, they may agree more with their neighbor than with God. Though we have heard it preached and taught that there is only one way to God, is that enough for our tolerant society? Can there be only one way? Do people have to believe the way that I do to go to heaven and escape hell?

b. Universalism is more believed than we would like to admit.

As Karl Barth said in the Humanity of God “This much is certain, that we have no theological right to set any sort of limits to the loving-kindness of God which has appeared in Jesus Christ. Our theological duty is to see and understand it as being still greater than we had seen before.”

People often believe in the back of their minds that God will somehow fix everything. God is just too good to let anyone go to hell. If there is life after death, God will take care of everyone. All roads indeed do lead to Rome.

c. Fatalism is another doctrine or teaching that I believe 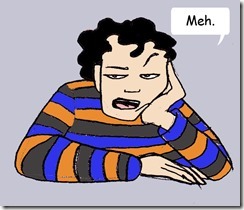 causes apathy. No Christian leader would ever admit to fatalism. The doctrine might be called sovereignty, Calvinism, or something else but it causes many to think that "whatever will be will be whether it is or is not!"

Fatalism says that God will save who He will. He planned it before the foundation of the world and being Almighty, nothing can be done to change it. If it is all predetermined, then there will be nothing that I can do to make a difference: I cannot change my hard-headed friends nor family members.

2. Miserable Doubt causes apathy. Many Christians believe that they are inadequate, they fear getting insulted, and they are spiritually insecure.

a. Inadequate because they doubt that God will use them. They believe that others are called and chosen to witness. They feel that they are not gifted in the area of evangelism or soul winning. They would witness or go as a missionary if God called them, but they do not feel that He has done so. They feel powerless to convince others. They feel like the heavy hitters should be the soul winners; that is, the missionaries and the preachers.

b. Most fear getting insulted. Our people are afraid of what others will think of them. Being rejected by a friend is more frightening than disobeying God. Some believe that their friend may get offended and then he will never be saved. For these reasons, they have no desire to be confrontational.

c. Most Christians live in spiritual insecurity. They would like to see someone get saved but do not know how to make that happen. They know that God can save, but they do not understand how they can be part of His plan; others do not have the confidence to push their beliefs on others. They wish they had the boldness and gifting of the pastor, preacher or missionary, but that is not the case.

3. Mistaken direction is the last cause of apathy that we will discuss. This one hurts the preacher, pastor, or leader the most. So here I go pointing the finger at myself.

a. First, there is often a lack of preaching on soul winning or missions. We want our people to participate, we announce scheduled events; but in all honesty, we do little to train them. The idea that God can use them without them being the special anointed ones should be preached. The fact that they do not need a special call should regularly be explained. The needs of "lost" people should be held up in front of them regularly.

b. Then there is what I want to call a little pretense. We tell our people that they are saved by grace but then use our pulpits to bully them to do things, or tell them that God doesn't love them like He would and could. We invite lost people to salvation by grace and then throw on a yoke of bondage. We manipulate them, put guilt trips on them to get them to go soul winning! We have robbed them of the privilege and put them under the obligation. This causes apathy.

c. Low preaching or not preaching the beauty of God hurts our cause and breeds apathy. We can be hard, mean and offend people. People are afraid to invite their friends to church, because they may get insulted or hurt. Isn't he gospel supposed to be the "good news"?

It is one thing to offend them with their need for salvation but another to mock their sin or condition. We often preach politics and opinions more than salvation and service. I feel like we have lowered our preaching and ourselves when we do that. The pastor needs to be filled with the Spirit and bursting at the seams with the truth of the gospel. They must see real heartfelt passion backed up by Biblical truth.

Let me give a few solutions to consider:

1. Take them on mission's trips and let them see the lost and what the world does to those that do not know Jesus.

2. Take your people on a field trip:

a. Take them to a high place over your city and pray for lost souls.

b. Take them to the cemetery and show them the graves. Preach to them that some of those are in hell suffering for eternity.

3. Preach the Bible verse by verse so that they learn the great truths of the Bible.

4. Drop the threats and manipulation.

5. Set the example as we go ourselves and share the gospel.

6. Have a testimony time in the evening services where people can share their attempts at sharing the gospel.

7. Make sure gospel tracts are available.

8. Remember you get what you look for, what you praise, what you honor, and what you expect.

9. Make it all an exciting event, not a dreaded part of their life and ministry.