Note: Today's post brings this series to an end. I shall now take my usual holiday break, and return with a new series in January. Have a happy Thanksgiving and a Merry Christmas.


I want to end this short series on the Tabernacle today by bringing to your attention three distinct aspects of what took place within this room, the Holy of Holies. I will briefly explain all three in their setting of the Tabernacle, and then show you how they directly and wonderfully point to Jesus Christ. To do this, I am going to briefly explain what happened inside this room once a year.

Once a year, on the Day of Atonement, the following series of events would take place. The High Priest would dress carefully, kill and offer a bullock on the Brazen Altar, and retain some of the blood. He would then combine in a censer some coals from the Brazen Altar and some incense from the Altar of Incense, and carrying that in one hand with the blood from the bullock in the other hand, he would enter the Most Holy Place. Once inside, he would sprinkle the blood of the bullock seven times on the lid of the Ark, the Mercy Seat, in order to cover his own personal sins. This allowed him to safely enter the presence of God.

This Mercy Seat was the ornate, gold-covered top or crown 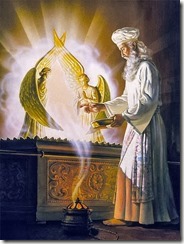 to the wooden chest that was the Ark of the Covenant. Two massive carved cherubims, covered in gold, stood with wings unfurled over the Mercy Seat. And somehow, floating above the Mercy Seat, was the Shekinah glory, the cloud that represented God’s very presence dwelling or tabernacling in the Most Holy Place.

Aaron would then return back outside, and cast lots on two goats. One goat was then killed, and its blood reserved. Aaron would then bring the blood of the sacrificed goat back within the Veil, and sprinkle it – this time for the people – around and on the Mercy Seat. He would then leave the Most Holy Place, return to the still living goat, and give it to someone who would lead it out into the wild and allow it to go free. This goat, called the scapegoat, symbolically bore the sin of Israel far away when it left. This term – scapegoat – has thus in English come to mean someone who receives the blame for something someone else did.

In this, there are three distinct pictures of the Messiah’s work, the one whom we know as Jesus Christ.

First, Jesus is our High Priest. It was the High Priest’s job to be the mediator between the people and God, satisfying God’s wrath at their sin on the Day of Atonement by sprinkling the blood on the Mercy Seat. In essence, then, he pled before God for forgiveness on behalf of the people. Exactly so, Jesus is our High Priest.
Hebrews 3:1 Wherefore, holy brethren, partakers of the heavenly calling, consider the Apostle and High Priest of our profession, Christ Jesus;
…
Hebrews 6. 19 Which hope we have as an anchor of the soul, both sure and stedfast, and which entereth into that within the veil;
20 Whither the forerunner is for us entered, even Jesus, made an high priest for ever after the order of Melchisedec.
…
Hebrews 7. 22 By so much was Jesus made a surety of a better testament.
23 And they truly were many priests, because they were not suffered to continue by reason of death:
24 But this man, because he continueth ever, hath an unchangeable priesthood.
25 Wherefore he is able also to save them to the uttermost that come unto God by him, seeing he ever liveth to make intercession for them.
26 For such an high priest became us, who is holy, harmless, undefiled, separate from sinners, and made higher than the heavens;

Not only is Jesus our High Priest, He is also our sacrifice, shedding His own blood to atone for our sins. And from Jesus Christ, who is the faithful witness, and the first begotten from the dead, and the prince of the kings of the earth. Unto him that loved us, and washed us from our sins in his own blood. (Revelation 1.5)

All of the blood shed in the Old Testament, with its millions of sacrifices, was simply meant to point toward this blood, the Messiah’s blood, shed for us and applied for us, covering our sin. Yes, He was the High Priest, but as High Priest a resurrected Jesus carried His own blood into the Holy of Holies in Heaven’s Temple and there sprinkled it on the one Mercy Seat that matters. And my sin was covered and so was yours.
We see, finally then, that Jesus Christ is thus in a sense the Mercy Seat for our sin. Being justified freely by his grace through the redemption that is in Christ Jesus: Whom God hath set forth to be a propitiation through faith in his blood, to declare his righteousness for the remission of sins that are past, through the forbearance of God. (Romans 3.24-25) Do you know what “mercy seat” means in the original language? Propitiation, which in turn means - appeasement. A holy God is justifiably filled with anger at us because of our sin. We need something that will appease Him. Since the wages of sin is death what will appease Him is death, as represented by a sacrifice’s blood. But we have to find someone who’s shed blood would not be needed for their own sin. The only someone like that? The only to ever keep the Law perfectly, Jesus Christ.

Thus it is that when He, acting in His capacity as High Priest, sprinkled His own blood on Heaven’s Mercy Seat, it bought us mercy, appeasing a justifiably angry God. And mercy rejoices against judgment since God’s wrath has been appeased by the propitiatory sprinkling of the shed blood of Christ on the Mercy Seat.

I leave you finally with this passage from Hebrews for I cannot say it better than this.

Hebrews 9.2 For there was a tabernacle made; the first, wherein was the candlestick, and the table, and the shewbread; which is called the sanctuary.
3 And after the second veil, the tabernacle which is called the Holiest of all;
4 Which had the golden censer, and the ark of the covenant overlaid round about with gold, wherein was the golden pot that had manna, and Aaron’s rod that budded, and the tables of the covenant;
5 And over it the cherubims of glory shadowing the mercyseat; of which we cannot now speak particularly.
6 Now when these things were thus ordained, the priests went always into the first tabernacle, accomplishing the service of God.
7 But into the second went the high priest alone once every year, not without blood, which he offered for himself, and for the errors of the people:
8 ¶ The Holy Ghost this signifying, that the way into the holiest of all was not yet made manifest, while as the first tabernacle was yet standing:
9 Which was a figure for the time then present, in which were offered both gifts and sacrifices, that could not make him that did the service perfect, as pertaining to the conscience;
10 Which stood only in meats and drinks, and divers washings, and carnal ordinances, imposed on them until the time of reformation.
11 But Christ being come an high priest of good things to come, by a greater and more perfect tabernacle, not made with hands, that is to say, not of this building;
12 Neither by the blood of goats and calves, but by his own blood he entered in once into the holy place, having obtained eternal redemption for us.

What is the Tabernacle about?

Him. Who He is and what He did for us.

Email ThisBlogThis!Share to TwitterShare to FacebookShare to Pinterest
Labels: the Tabernacle