note: this was originally published February 17, 2014 as Life of Christ 25; I repeat it here because any discussion of alcohol simply must involve this passage 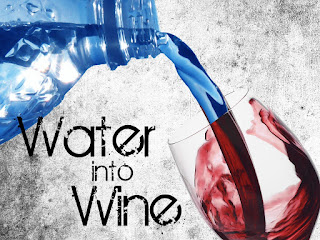 I'm a teetotaler. That is just an old-fashioned term for someone who doesn't drink alcohol. I do not mean by this that I only occasionally imbibe, but rather that I never do. In fact, I'm one of those rare people in existence who never have. I know that beer smells bad, but I have no idea what it tastes like, let alone wine or spirits. I do this out of the conviction that drinking alcoholic beverages is wrong for God's people. This doesn't make me better than those who do - though I would argue it makes me wiser (Proverbs 20.1) - but it does mean I'm going to have this story (John 2.1-11) thrown at me about a million times in my life. It usually goes something like this:
'What? You don't believe in drinking? C'mon, man! Everybody knows that Jesus Himself turned water into wine. If it's good enough for Him it's good enough for me.'
I realize that there are many good Christians who disagree with me on this issue. They take the position that the Bible condemns drinking in excess, but not drinking in moderation. They, like I, believe drunkenness is a sin, but they, unlike I, see nothing wrong with enjoying an occasional alcoholic beverage. They point to a long tradition of such behavior being accepted by the Church, and they point especially to passages such as this as evidence that moderate drinking is perfectly appropriate for the Christian.
For these reasons, amongst others, some years ago I decided I needed to study out the issue in some depth. I compiled a number of different books, and spent a good amount of time looking at both those books and the hundreds of Bible references to wine and strong drink. I am confident I have come to a good understanding of what the Bible teaches on the issue, and while I will not take time to present everything I learned on this blog at this time, I do want to briefly address this story from this perspective for it is something that comes up so often. 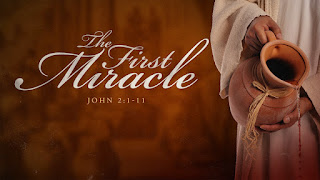 One of the mistakes we make in our generation is to take a twenty first century definition and put it to a first century biblical word or phrase. To us, 'wine' always means an alcoholic drink. In Jesus' day, this was not the case, as the word was used to mean grape juice preserved in both an alcoholic and a non-alcoholic manner. Christians who believe in moderate drinking take the position that it the secret to preserving grape juice over time in a non-alcoholic state was unknown prior to Thomas Bramwell Welch applying pasteurization to it in 1869. Those Christians are most assuredly wrong. There are literally dozens of extant quotes from historical sources that soundly establish a large variety of cultures, even back in Bible times, knew how to preserve grape juice in a non-alcoholic manner for a long period of time, and that people used the term 'wine' interchangeably to refer to both.

The simple truth is that 'wine' in the Bible sometimes means alcoholic wine, and sometimes simply preserved, non-alcoholic grape juice, and it is my understanding that we generally figure out which is which by examining the context of the usage.
This wine that Jesus made was not at the beginning of the feast, but later on, after they had already drunk what was there. Those who assert that 'wine' in the Bible is always alcoholic have to understand that the people at the feast in Cana were already well on their way to being soused when the wine ran out. A firkin is about nine gallons, so each stone water pot held between 18-27 gallons, and there were six of these, meaning these water pots held between 108 and 162 gallons. Let us take the middle number of 135 gallons. If what Jesus miraculously manufactured was alcoholic wine then we must understand that He just dumped into the laps of a border-line drunken crowd a staggering 135 more gallons of premium alcoholic wine. If that was the case, in light of all that the Bible has to say about the negative effects of alcohol, what kind of a wedding feast would have resulted? I propose to you it would be the kind of feast that Noah had in Genesis 9 and that Lot had in Genesis 19, a drunken, debauched, and sensual party.
Is that how Jesus would have wanted the holy institution of the marriage of this couple to begin? Is that how Jesus would have wanted to begin His public ministry? Is that how Jesus would have wanted to enter into the initial training of His few disciples? Is that the kind of wedding feast He would have wanted His mother to attend? No, no, no, and again, no! The Word made flesh would never have so contradicted the written Word of the Old Testament prophets.
For many years we have had small children in our home, and they drink a fair amount of juice. One of the cheapest places to buy it in our neighborhood is ALDI, and my wife will frequently bring home some apple or grape juice from there. Personally, and do not tell my children please, I refuse to drink it. I find the flavor to be completely unacceptable. The container says 100% juice, and I assume they are telling the truth, but I cannot bring myself to imbibe as the taste is so poor.
On the other hand, I contrast this in my mind with an afternoon walk I took in an orchard some years back. We had gone together, as is our custom, in the Fall to pick some apples together as a family. This particular day was unseasonably warm for October in our region of the country, and the sun was shining brightly. On the way back to the section of trees to be picked that day we happened to walk by a grape arbor. Seeing the plump purple grapes hanging down in clusters, on impulse, I grabbed a bunch, and as I walked I began to eat them. Much to my delight, I found those perfectly ripened and sun warmed grapes, plucked fresh just moments ago from the vine, to be absolutely divine. As I walked I began to squeeze them, one by one, into my mouth, popping them out of the skin, and savoring the taste until the red juice began to dribble down my chin. I have never forgotten that taste, and although I've also never been able to replicate it, I have enjoyed it many times in my mind.
Yes, Jesus turned water into wine at the wedding feast in Cana. I accept that, and indeed, even embrace it. It was the sweet beginning to our Saviour's public ministry. But, and if you will forgive the poverty of the illustration, what He did was replace the just run out of ALDI 100% juice reconstituted from concentrate with the just squeezed blood of perfectly ripened sun warmed grapes plucked moments ago from the vine.


…and the governor's eyes lit up, just as mine did, on that October walk in the apple orchard, a few years ago.
Posted by Tom Brennan at 9:17 AM