Evil in the Midst, Part One 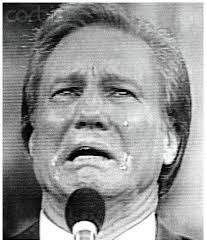 “I have sinned!” he wailed, looking into the assembled television cameras of the world, with tears streaming down his cheeks. Thus began an exceedingly public and painful revelation of the secret wickedness of one of the world’s most respected religious leaders. In the months and years to come his secret sin would be played across the airwaves and pages of the media in excruciatingly minute detail. Each twist and turn down his increasingly perverted path would be recounted by journalists, eager to be the first to ferret out another evidence of his total hypocrisy. His willing participants would cash in on their fifteen minutes of dubious fame by selling their side of the story. In conjunction with the equally squalid tale of other famous televangelists, his story still reverberates decades later, told with glee by worldlings confronted with a testimony of righteousness in a coworker or relative. And whether it is the head of a national evangelical organization, or a seasoned independent Baptist megachurch pastor, new stories constantly stir up the old.
“I was almost in all evil in the midst of the congregation and the assembly” (Proverbs 5:14) Solomon said, in a warning to his son that he himself would not heed later in his life. Down through history there have been countless instances of such hypocrisy. Men, God’s men, lifted up as leaders before His people, are routinely discovered to have been “in all evil in the midst of the congregation.”
Such was the case with Samson, a judge in Israel in ancient times. While being used of the Lord to deliver His people from the overbearing rule of the Philistines he slept with prostitutes and saw the Philistine Delilah in secret.
Such was the case with David, the second king of Israel, and arguably its greatest king. While enjoying a sterling reputation and the affection of God’s people he committed adultery, and then attempted to cover it up with murder and remarriage.
Such was the case with the devil before time even started. While serving God in Heaven, on intimate terms with all that is holy and pure, pride crept into his heart. In the home of all righteousness, enjoying the confidence of the other angels, he fomented evil in the midst of that heavenly congregation. 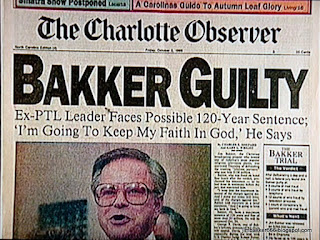 Scripture plainly teaches that, sooner or later, every man with such secret sin hidden “in the chambers of his imagery” (Ezekiel 8:12) will have that secret sin exposed to the harsh light of a judgmental world. Moses instructed men in the tribes of Gad and Reuben “be sure your sin will find you out” (Numbers 32:23). Christ Himself, while discoursing with the disciples in a public manner warned them “that which ye have spoken in the ear in closets shall be proclaimed upon the housetops” (Luke 12:3). While men constantly close the door and pull the blinds in an attempt to keep evil in the midst of the congregation hidden, or drive to a distant city where they think they are unknown, and carefully check that no acquaintance will see them, they proverbially fail to look UP! “Can any hide himself in secret places that I shall not see him? saith the Lord” (Jeremiah 23:24). God knows, and in the perfection of His timing, the whole world knows as well.
When this private sin, done in secret by God’s man, is discovered by the portion of God’s people following that man, they are often completely at a loss. They are disgusted, disappointed, and usually discouraged in their own service for Christ. Many a bitter, disillusioned Christian sitting on the sidelines of Christianity found his place there in reaction to the discovery of “evil in the midst of the congregation” on the part of God’s man. The shock and dismay of good people who were following what they sincerely believed was a good man is painful in the extreme. The wound is not confined to the immediate family, or even the immediate church, but spreads like a blot across all whose lives he touched in his service for Christ. The hurt infects the hearts of congregations, friends, and family, and often metastasizes until it swallows up the effective Christianity of whole groups of God’s people, and brings intense reproach upon the name of Christ.
One of the common and most oft heard imprecations uttered in the wake of such a spiritual disaster is this: “How could it be that God appeared to be using him so marvelously and yet he was so thoroughly evil so long?” Christians with a unique and loyal love for the man they feel God used in a special way in their own life will react with incredulity and befuddlement, wondering about all they have seen God do in their own life, and in their church’s life, with that man.
I know…because I experienced it myself personally…twice.
When I was just a boy, one of God’s choice servants, fresh out of Bible college, with all the zeal and enthusiasm of youth on fire for God, moved into our area and accepted the pastorate of a dying church not far from ours. Within the space of a few years he had built that church from 30 to 400, with all the accompanying buildings, ministries, plaudits, and praise that go along with it. As a teenager I got to know him somewhat, and watched carefully, for I was already preparing to pastor myself, and thought I might learn much from such a man. Then the day came that he suddenly resigned the pulpit of a growing, successful work, and slowly but surely the sordid details leaked out. The devastation that man’s life wrought in that youth group I knew so well, in the Christian school his church sponsored that I attended, in that church, in neighboring churches, and even across the country in a somewhat limited national way is incalculable. While I saw some Christians react with grace and maturity, many if not most reacted with the sorrow and befuddlement I have already described. I spent many a hurt and lonely hour puzzling over the how and why myself. Surely it was only by the grace of God that I did not become another bitter and disillusioned casualty, blaming my own Christian immaturity on another man’s sins.
Later, while in Bible college, a man on staff at the college, greatly respected and followed for his apparent zeal in service for Christ, left his wife and his calling after becoming “evil in the midst of the congregation and assembly.” I had heard him preach often, and actually shared some shifts with him at a steel mill he worked at part time in the summers, and his private sin, publicly revealed, likewise caused pain and puzzlement in my heart.

How is it possible, that these men, serving God and seeming to achieve great things while doing so, are revealed to have been hiding some terrible sin for so long?
I have pondered long and hard on that. If you will allow me to say this humbly, I have searched the Scriptures for the answer. The pain and puzzlement I spoke of in my own life is replicated in thousands of others on an all too frequent basis, and perhaps the Lord will grant to them some measure of consolation and understanding in the answers He has given me. To that end, “that we may be able to comfort them which are in any trouble, by the comfort wherewith we ourselves are comforted of God” (II Corinthians 1:4) over the next eight weeks I am going to offer for your consideration those answers that have most helped me. I am sure I do not have all the answers and, as always, I welcome your comments and questions. But I hope that these next few weeks will help God's people to understand these awful situations better, and thus be emotionally and spiritually prepared when they happen.
Posted by Tom Brennan at 1:59 AM