A Philosophy of Personal Evangelism 1

One of the strengths of the independent Baptist movement is that we heavily promote personal evangelism. We certainly are not the only group to do this, but it is conspicuous both in our history and in our present. I think it is fair to say that we emphasize it more than any other orthodox religious group.

In this series I want to attempt to answer that question, or at least to offer some insight into an answer. Your own perspective or response is welcome, as always.
The word "philosophy" is used only one time in the King James Bible and that use is negative. Beware lest any man spoil you through philosophy and vain deceit, after the tradition of men, after the rudiments of the world, and not after Christ. (Colossians 2.8) Yet we notice here that not all philosophy is condemned, only worldly philosophy.

Philosophy is defined as a set of ideas or beliefs relating to a particular field or activity. In the original language the word simply means a lover of wisdom. Surely, then, philosophy cannot be entirely unscriptural for we are repeatedly told in Scripture to love wisdom. What are to love is not the world's wisdom but God's wisdom. Philosophy, then, for the purposes of this blog series, means the why behind the what that we do and emphasize in relation to personal evangelism. More plainly, there are good reasons why we push confrontational soul winning, and I want to explain them to you in this series.

Let me begin negatively. In other words, the following are not philosophies that undergird our approach to personal evangelism – though they are often thought to be. 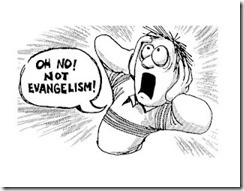 First, it is not because confrontational soul winning is a popular method in American Christianity. Now I freely admit it was embraced initially by many churches and pastors in the 1960s and 1970s who had a desire to copy the success of Lee Roberson, Jerry Falwell, and Jack Hyles. But such is no longer the case. In fact, soul winning is now routinely criticized, certainly in evangelical circles and even somewhat in fundamentalist circles. Statements such as "you're plucking green fruit," "you're giving people a false sense of security," "soul winning doesn't work in our day and age anymore," and "the message doesn't change but the methods do" are constantly heard. No, churches and pastors are not flocking to this. We are not following a trend by any means.

Second, our emphasis on personal evangelism is not rooted in an attempt to build a bigger church. I do not know of any pastor that wants his church to be smaller; we are all trying to grow spiritually and numerically, but that is not why we go soul winning. If that was our primary motivation the obvious path to take is not confrontational soul winning; it would instead be the pragmatism of the contemporary church growth movement. We would speak much more of marketing and relevance. We would say much less about worldliness. Etc. etc.

Third, it is not because we are unwilling to change. I suppose there are some men and churches that still promote soul winning because that is all they have ever known, but I am sure they would be a small minority. Is the independent Baptist movement suspicious of change? Yes. Is it loathe to change? Again, yes. Are we cautious of change? Yes. But the hundreds of independent Baptist pastors I know are willing to change – if that change is in the right direction. But we all, with open face beholding as in a glass the glory of the Lord, are changed into the same image from glory to glory, even as by the Spirit of the Lord. (II Corinthians 3.18) Change must be toward God, toward the precepts of Scripture; it dare not be toward the world. Fear of change is not holding us hostage to the methods of the last generation.

Fourth, our emphasis on personal soul winning is not because it is an easy thing to do. I have been pastoring for twenty years. I can think of a thousand things that are easier to develop in a church's culture than soul winning. In fact, I can think of nothing more difficult. Soul winning is not easy. It takes practice and time and work to learn. It takes a dedicated amount of time. It involves overcoming a person's fear of rejection, and the accumulated weight of a church's inertia and excuses. Additionally, there is nothing the devil fights harder than a soul winning church unless it might be a praying church. It would be much easier to get a church wound up about world hunger or anti-violence marches or some other immediate, visible, and emotionally affecting cause than it is to motivate them to win souls.

Fifth, our soul winning emphasis is not embraced because we have a persecution complex. Is soul winning hard? Yes. Is it unpopular? Yes. Does it get criticized? Yes. Are there some who will perversely do it for exactly these reasons? Also, yes. They do not seem to feel spiritual unless they are being attacked for their faith. Ergo, they embrace behaviors that practically solicit a push back so they can claim they are one of the persecuted few who are actually righteous. But such people are few and far between; their numbers could in no wise account for such a widely embraced emphasis on personal evangelism.

Sixth, it is not because we can claim big numbers via these methods and thus impress "the brethren." Therefore when thou doest thine alms, do not sound the trumpet before thee, as the hypocrites do in the synagogues and in the streets, that they may have glory of men. Verily I say unto you, They have their reward. (Matthew 6.2) Yes, we keep track of how many get saved. Yes, we want to win more people to Christ this year than last year. But the men and churches I know well in the independent Baptist movement have given up the numbers game. We have seen in our youth where such foolishness often leads. In fact, I cannot think of the last time a preacher friend of mine asked me how big our church was, how many we had baptized last year, or how many professions of faith we see.

Perhaps someone told you these were our reasons. Perhaps someone intimated that our motivations are petty, shallow, vain, lazy, and self-serving. Obviously I disagree. I do not disagree that some may have such unscriptural motivations; I completely disagree, however, that these drive our movement's emphasis on personal evangelism. We are better than that.

Next week we will flip the coin over and begin to examine the positive side. Stay tuned.