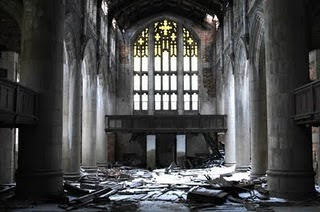 Last week, we saw that the church at Jerusalem had some wonderful strengths, but it certainly was not a perfect church. What does Scripture reveal about its weaknesses and what might that teach us about our own church?
The first weakness I see in Jerusalem is that it was a big church.
“Wait a minute, Tom. Didn’t you say last week that was a strength?”
I did. It is also a weakness. Why? Well, a big church is usually so exciting that no one wants to leave it. They want to stay right there, enjoy the high-class music and high-quality preaching. They want the programs and schools for their kids. They want the cachet that comes from being part of the biggest, the greatest, the best church since Pentecost.
In college, I used to call this the gold-coat ministry. Some guy was called to the ministry and headed off to Bible college. While there he met a beautiful gal and started having children. His graduation date slipped further away, or perhaps arrived and then passed without him getting a position in the ministry. Perhaps he got into a little debt, or his wife had some health trouble. Before you know it, his dreams of the pastorate had vanished, and he settled for being one of a hundred other ushers wearing gold coats and taking the offering on a Sunday.
I am not trying to criticize ushers, and I realize there are many contributing factors that enter into a man’s decision not to enter the pastoral ministry. But the simple truth is, big churches all too often become magnets, pulling people away from smaller church and then never letting them go. I am not saying that is their intention, but it is often their effect.
God, in His sovereign wisdom, chose to allow persecution to come to that big church in Jerusalem and the context shows us the direct positive consequence. And Saul was consenting unto his death. And at that time there was a great persecution against the church which was at Jerusalem; and they were all scattered abroad throughout the regions of Judaea and Samaria, except the apostles (Acts 8.1). As for Saul, he made havock of the church, entering into every house, and haling men and women committed them to prison. Therefore they that were scattered abroad went every where preaching the word (Acts 8.3-4). The earthly result of this scattering-induced preaching, is that Christianity went from being a small, geographically centered, ethnically limited, backwater sect to a Roman Empire wide religion. Why is it that we do not know how so many of the churches in the New Testament started? Because they started themselves. Men fled Jerusalem, fled Palestine, and as the Christian Diaspora traced the lines of the Jewish Diaspora, churches sprang up everywhere.
We have this American mindset that seems to say God wants all ministries to grow, to thrive as we see it. But God wanted John the Baptist’s ministry to decrease, and John understood that. That is the direct context of his famous statement, He must increase but I must decrease (John 3.30). God chose to break up the only megachurch in the Bible because He knew the gospel would spread as a result. A numerically growing church or a church of substantial size is a blessing, certainly, but sometimes the blessing comes when it shrinks. We seem to forget that in our all too often narrow-minded parochialism.
The second weakness at Jerusalem was also connected to one of their strengths. You will remember I said that they were thoughtful of each other’s needs. It is seen in how generous they were with each other. But such giving, as it wonderfully became the culture of their church, produced a corresponding weakness. Some gave for the wrong reason.

I will not here belabor the story of Ananias and Sapphira found in Acts 5, but I will ask you to note it. They gave generously, even sacrificially, but they did so for the wrong reason.
If there are people in your church giving in order to impress others, that is a weakness. If there are people in your church giving in order to soothe their conscience regarding some unknown-to-everyone-else sin, that is a weakness. If there are people in your church giving in order to win people to their side, or to build a power base useful in church politics, that is a weakness. We are to give because God told us to. We are to give because we want to invest in eternity. We are to give because it helps people and advances the Lord’s work. In short, we are to give with the right motive.
God is at least as interested in motive as He is in action. We see that from one end of Scripture to the other. Giving done in pride is abhorrent to Him, as is witnessing, parenting, praying, preaching, or a thousand other things. Why my people do what they do can be a tremendous weakness all the while it looks like my church has a great strength.
The third weakness I see in Jerusalem is that they lost their unity due to ethnic strife and division. And in those days, when the number of the disciples was multiplied, there arose a murmuring of the Grecians against the Hebrews, because their widows were neglected in the daily ministration (Acts 6.1). This would go on to become an unhealthy pattern in the early churches. It was rooted in the Jewish religiously motivated racism endemic in their culture. One rabbi of Jesus’ era took a bath every time he came home from the market in case he had touched something previously handled by a Gentile. The Sadducees used to mock the Pharisees saying soon they would soon need to wash the rays of the sun since it shone on the Gentiles also.
Paul’s method of church planting was brutally efficient. He would enter a city, find the synagogue or place of prayer, and take advantage of the open service concept to stand and argue that Jesus was the Christ. After doing this for a few months he would split the synagogue, gather his converts, and start a church. In so doing, he began with a core group that was immediately rather mature. They were dedicated to their religion, knew their Bibles, and had a proven life-long willingness to buck the societal trends of the day. But racism was baked in with all the rest of that, and Paul had to deal with it repeatedly in his epistles. The churches, started organically by the Jewish believers scattered via persecution from Jerusalem, would have had the same basic problem.
We dare not, however, sit secure in our twenty-first century aplomb and look down our noses at the first century church. I have read too much of our recent history to feel we have won this battle. Indeed, after including a chapter about racism in Schizophrenic I have received emails and messages from many people regarding the racism still prevalent in our churches today. When we treat others differently on the basis of their ethnicity we infringe upon their basic humanity, and when we bring that into God’s house we violate all that He intends His church to be.
Beloved, do be welcoming to all those who walk into the doors of your assembly, from wherever they hail, however they got there, and whatever they look like. If Jesus died for them like He died for me, that ought to be good enough for all of us.
I cannot write it any more clearly than Paul did in Ephesians 2. I leave you with his words and ask you to ponder them. 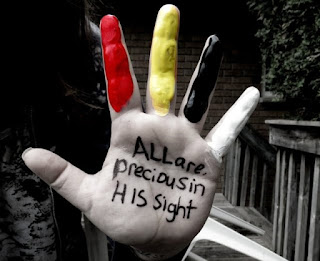 13 But now in Christ Jesus ye who sometimes were far off are made nigh by the blood of Christ.
14 For he is our peace, who hath made both one, and hath broken down the middle wall of partition between us;
15 Having abolished in his flesh the enmity, even the law of commandments contained in ordinances; for to make in himself of twain one new man, so making peace;
16 And that he might reconcile both unto God in one body by the cross, having slain the enmity thereby:
17 And came and preached peace to you which were afar off, and to them that were nigh.
18 For through him we both have access by one Spirit unto the Father.
19 Now therefore ye are no more strangers and foreigners, but fellowcitizens with the saints, and of the household of God;