The Potential of Personal Evangelism

A Philosophy of Personal Evangelism 7

This is a series that attempts to explain why our kinds of churches emphasize personal evangelism, and why we are right to do so. Thus far we have discussed both good and bad motivations to witness. We then briefly sketched for you a history of evangelism. In the process we discovered that there are really only two kinds of evangelism, personal and impersonal, and that impersonal evangelism is limited in its effectiveness primarily because it calls for men to come to church rather than calling for them to come to Christ.

The first part of the book of Acts records the staggering rate of growth of the Early Church. How were they able to reach so many people with the Gospel so quickly? There are several answers to that question but one answer is that the Apostles placed an emphasis on taking the Gospel to every home in Jerusalem.

Acts 5. 14 And believers were the more added to the Lord, multitudes both of men and women.)
…
17 ¶ Then the high priest rose up, and all they that were with him, (which is the sect of the Sadducees,)and were filled with indignation,
18 And laid their hands on the apostles, and put them in the common prison.
19 But the angel of the Lord by night opened the prison doors, and brought them forth, and said,
…
27 And when they had brought them, they set them before the council: and the high priest asked them,
28 Saying, Did not we straitly command you that ye should not teach in this name? and, behold, ye have filled Jerusalem with your doctrine, and intend to bring this man’s blood upon us.
…
42 And daily in the temple, and in every house, they ceased not to teach and preach Jesus Christ. 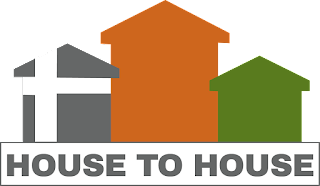 I have met those who maintain that in every house was not evangelism but rather the 1st century equivalent of home Bible studies or house churches, but the context does not bear this out. From verse 17 to verse 42 is one story. In that story the Sanhedrin is not attempting to stop sermons to the saved but rather the Apostles' efforts to give the Gospel to the lost. Some of this was done via public preaching (daily in the temple) but some of it was also done personally from house to house (in every house).

This emphasis on a personalized individual presentation of the Gospel at each house was not just modeled in Jerusalem by Peter. It was taken up by Paul and used in his church planting efforts.

Acts 20. 17 And from Miletus he sent to Ephesus, and called the elders of the church.
18 And when they were come to him, he said unto them, Ye know, from the first day that I came into Asia, after what manner I have been with you at all seasons,
19 Serving the Lord with all humility of mind, and with many tears, and temptations, which befell me by the lying in wait of the Jews:
20 And how I kept back nothing that was profitable unto you, but have shewed you, and have taught you publickly, and from house to house,
21 Testifying both to the Jews, and also to the Greeks, repentance toward God, and faith toward our Lord Jesus Christ.

Clearly, this is not a Bible study for those who are already saved. I am not against that, by any means, but going house to house and preaching repentance and faith in Christ is explicitly connected with soul winning. In other words, both Peter and Paul, and the churches they influenced, believed in preaching the grace of Christ corporately but also in taking the Gospel to the lost where they were at.

Acts 17.16 ¶ Now while Paul waited for them at Athens, his spirit was stirred in him, when he saw the city wholly given to idolatry.
17 Therefore disputed he in the synagogue with the Jews, and with the devout persons, and in the market daily with them that met with him.

Potentially then, personal evangelism is the only form of evangelism that can reach an entire community. Indeed, both in Jerusalem and in Ephesus they took the Gospel house to house and this is precisely what happened.

Ac 5:28 Saying, Did not we straitly command you that ye should not teach in this name? and, behold, ye have filled Jerusalem with your doctrine, and intend to bring this man’s blood upon us.
…
Acts 19. 10 And this continued by the space of two years; so that all they which dwelt in Asia heard the word of the Lord Jesus, both Jews and Greeks.
…
Ac 20:31 Therefore watch, and remember, that by the space of three years I ceased not to warn every one night and day with tears.

Jonathan Goforth was a Canadian Presbyterian. The Lord moved on his heart to take the 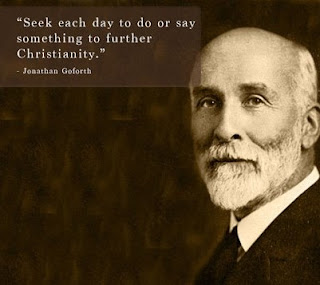 Gospel to China and then used him in a wonderful way. In his wife's short biography of him she tells of his days as a Bible college student in Toronto in the late 1800s.

On weekdays, Jonathan spent much of his time visiting in the slum district. His strategy was to knock at a door, and when it opened a few inches, he would put his foot in the crack. He would then tell them his business and if, as was usually the case, they said they were not interested and went to close the door, his foot prevented the proceedings from being brought to an abrupt end. As he persisted, the people of the house almost invariably gave way and let him in. Of all the many hundreds of homes that he visited during his years of slum work, there were only two where definitely failed to gain an entrance. While visiting in slum homes, Goforth would sometimes lead as many as three people to Christ in a single afternoon. Dr. Shearer, who accompanied him in his visits one day said, as they parted, “Goforth, if only this personal contact could have been made with every human soul, the Gospel would have reached every soul long ago.”

I don't advocate this approach to soul winning, but look past that to the fact that Bro. Goforth was using confrontational soul winning long before its so-called heyday in the 1950s and 60s. This is because he found such an approach to personal evangelism modeled in the Word of God. Nor was Goforth alone in this. The oft-quoted C. H. Spurgeon said in his 1863 sermon, "Am I Sought Out?":

There are thousands in London who never will be converted by the preaching of the gospel, for they never attend places of worship. Some of them do not know what sort of thing a religious service is. We may shudder when we say it: it is believed there are thousands in London who do not even know the name of Christ - living in what we call a Christian land, and yet they have not heard the name of Jesus. Thank God things are better than they were, but things are bad enough still. Brethren, you must go and see these things and mend them. To the lodging-houses, young men, you must carry the gospel, and to those thickly-peopled habitations, where every room contains a family, and not one room a Christian. I believe there is very much good to be done by house-to-house visitation - not by City Missionaries and Bible-women only, may God speed that noble body of laborers - but by all of you, by you that have position in society among your neighbors. Make yourselves free, and go and talk to them of Christ in the little houses that are near to you. As far as your time allows be a visitor, and if there be one dark part of the town known to you as the haunt of sinners, make it a point to use this agency of visitation from house-to-house. Let the lost sheep of Israel's house be sought out.

Peter and Paul, Goforth and Spurgeon, why even D. L. Moody understood the importance of personally confronting the lost with the Gospel. In Richard Ellsworth Day's biography of him he describes Moody in 1860s Chicago as "…this man who rushed through life making felonious assaults upon total strangers with his rude challenge, 'Are you a Christian?' "

I am not saying impersonal evangelism is wrong. It isn't. It just isn't as effective at reaching the entire community as confrontational soul winning can be.

…and that position is not one invented by the independent Baptist movement of our father's generation. It has a long and storied history for very good reasons.